The Mae West Room at Dali Theatre-Museum in Figueres, Catalonia 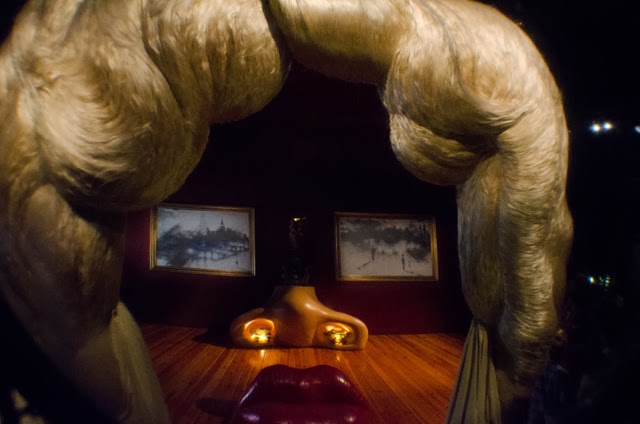 Today's image was taken at the Museu Dali and it is not a painting but an illusion created by Salvador Dali expressly for the Theater Museum in Figueres (province of Girona, Catalonia).

This work, is indeed based upon one of his paintings: Mae West's Face which May be Used as a Surrealist Apartment, 1934–35.

Mae West had a clear influence on the Catalan artist, particularly in the movie called: She Done Him Wrong (1933) by Lowell Sherman, where she plays a very seductive saloon owner. An important part of the illusion, in the foreground of the composition, are those lips that reminds of a cozy sensual couch, that slightly resembles a wood-and-satin piece of furniture by Dali known as The Mae West Lips Sofa (1937) although that one was pink, or better said, "shocking pink" as the lipstick shade inspired by the actress, developed by fashion designer Elsa Schiaparelli.

For those of you who have not visited the Dali Museum yet, let me tell you that to see the face you have to climb a small set of stairs and look through a sort of circular magnifying glass to better appreciate the isolated objects that integrate the composition.

Salvador Dali, was born in this location in 1904 and was even baptized in the church right in front of the museum. Nevertheless, he did not spend all his life in his hometown.

Dali studied at the Academia de San Fernando (School of Fine Arts) in Madrid in 1922 although he was suspended later, but not for academic reasons. He went many times to Paris and was influenced by Picasso, among other artists. All in all, he became world known as a surrealist artist in the period that goes from 1929 to 1937 in which he produced many of those paintings we admire so much today, such as ‘The Persistence of Memory’ (1931). Yes, the one with the melting watch!