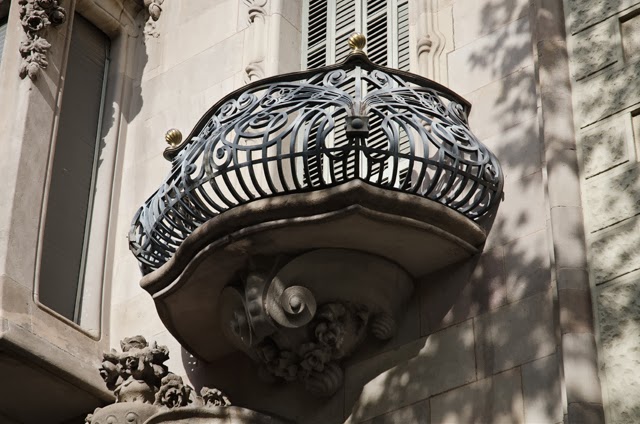 Casa Comalat is the most emblematic modernist house by Catalan architect, Salvador Valeri. This jewel of Catalan Art Nouveau, has two façades, the main entrance facing Av. Diagonal and the rear at carrer Roselló.

At first sight, nobody could tell the two of them belong to the same building if it were not for the intense use of undulated shapes and exuberant decoration, prominent features in the work of this artist.

Built between 1909 and 1911, the house inevitably reminds you of the strong influence of Gaudi's famous curves upon the artists of his times.

In the image today, there is only a balcony, as both sides of the house have been covered here in Barcelona Photoblog in the past (Avinguda Diagonal - Casa Comalat and Catalan modernisme: Casa Comalat).

Of course, this is not any kind of balcony as you can appreciate in the extremely beautiful and whimsical shapes of this wrought ironwork. I could tell you about the fabulous doorway, the gallery defiantly protruding from the façade crowned by an impressive pinnacle or about the shape of the turret on top of the building, or what is more, we could be talking for hours about the wooden galleries and the delightful ceramics on the other side of Casa Comalat, that are not precisely what you would choose to adorn the back side of anything, in the sense that, on that part, you feel like you are about to enter the Candy house in Hansel and Gretel fairy tale but why not concentrating on the details of this single balcony and let imagination fly. I took more pictures that will eventually appear on this blog, so do not miss them. Thanks for your time.
Posted by Carlos Lorenzo