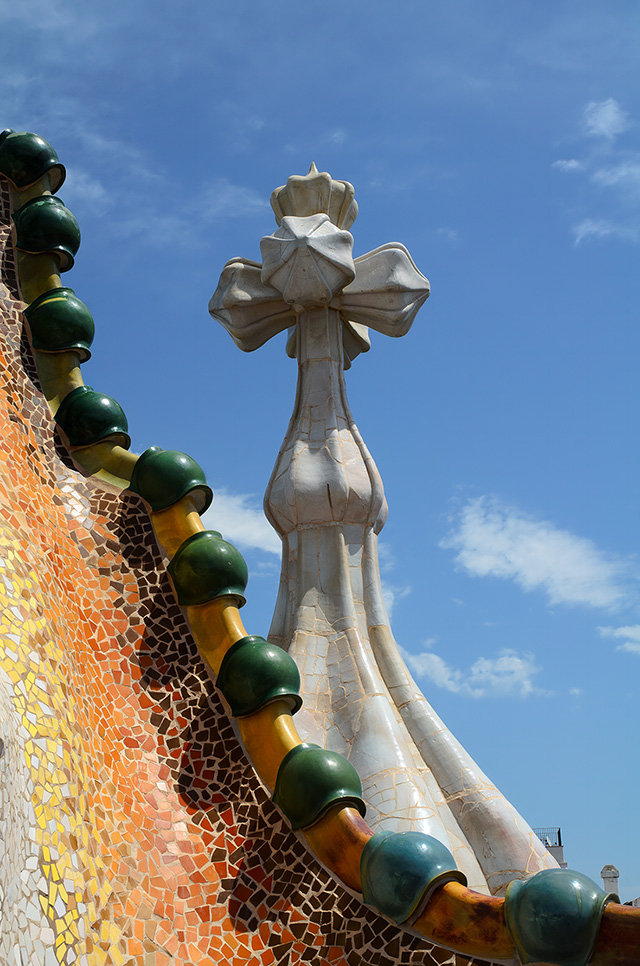 Behold the triumphant cross of four arms by Gaudi that symbolizes the way in which the Gospel spreads out to every corner of the known world. Notice how such geometrical perfection resembles the hilt of a sword, maybe the very sword of Saint George, piercing through the arched scales of the horrendous dragon in its quest for the tender maid that rots in an infamous castle tower on any odd well protected rock in Montblanc, Tarragona. Just for this moment of transcendental reminiscing on the roof of Casa Batllo while watching Gaudi's magic your visit is worth the money.
But we not only should thank Gaudi for his art here. As you know, most of the masterpieces that we admire today, are so, due to the disbursement of generous amounts of money by some unknown patron or businessman caring for his own well being. And so it was that in 1904, a well positioned family that had made a fortune in the textile industry and fostered five children bought this house at Paseo de Gracia 43. Believe it or not, Mr. and Mrs. Batllo first thought of tearing the whole place apart. No one wanted to be second best in this part of the city. Their house was in the middle of what is known today as the Apple of Discord, a small number of opulent houses off the old walls that were competing among each other to boast the best architecture in the brand new area of Ensanche. We have to say that hiring Gaudi was the most visionary decision of their lives and so we have to thank them on behalf of Barcelona and art.
Other buildings in the Block or Apple of Discord have been dealt with in this blog in the past: The Lleó Morera house (1902) by Montaner and the Amatller house (1888) by Puig and Cadafalch.
I took many other pictures but I leave you with this appetizer as I plan to save the rest for some other topics that elaborate on the famous history of Casa Batllo. Meet me there and thanks for dropping by after all the silence.
Check here Casa Batllo's Mask-Shaped Balconies in a previous Barcelona Photoblog post.
Posted by Carlos Lorenzo