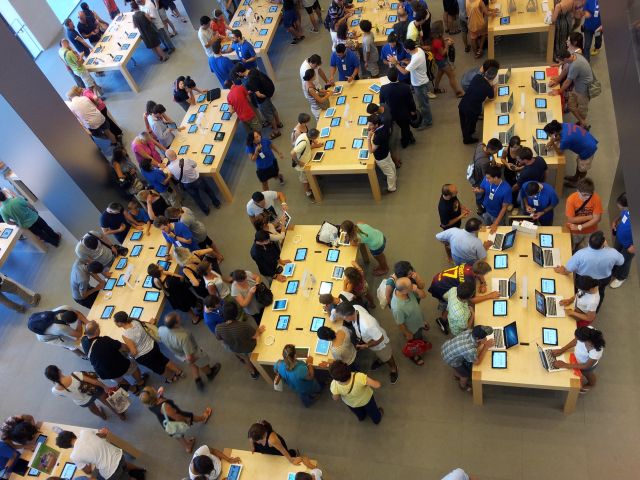 A brand new Apple retail store opened to the public last Saturday, July 28th right in front of Plaça Catalunya, the most central spot in downtown Barcelona next to Passeig de Gracia. With the intention of getting my wife's Ipod shuffle battery problems fixed we visited the venue two days ago. The first thing you notice is the big wide open space feeling and the materials prevailing in the design, basically glass and wood. Worth mentioning is the translucent glass staircase to the upper floor. If anybody at Apple is interested in my wife's opinion as a consumer, a middle age consumer with no special inclination for the Mac world, the shop is weird. But anyway, it is clear that it is conceived with a certain purpose, facilitate easy access, visibility, movement and a certain state of mind I think. Everything is already planned here. All in all I liked the store but I was overwhelmed by the amount of people and the fact that many were not buying anything. It was hot in there. It is quite hard to give good reviews in such scenario, chaotic as it was due to high temperatures, hordes of locals and tourists alike storming the place and a little bit of the normal craziness during the first week after the opening. Maybe you get a better picture of Apple's new flagship store in this gallery at Cult of Mac or in a previous announcement at Mac Rumors
Note: The picture was taken with a Samsung Galaxy S2
Posted by Carlos Lorenzo