Horta's Labyrinth from a Child's Perspective 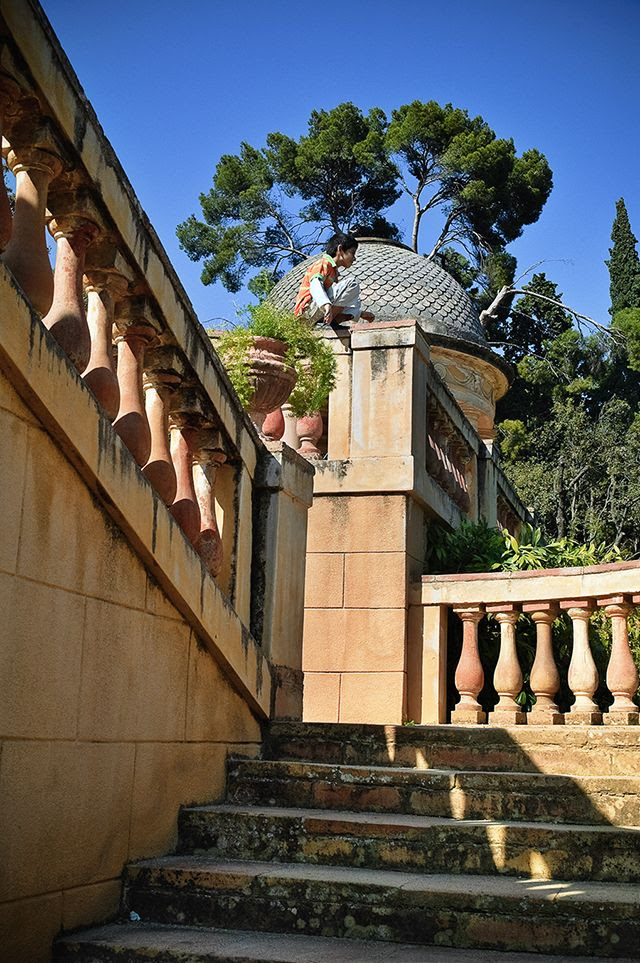 Absorbed in his own thoughts, subdued by the beauty of the cypress hedges tracing up the illusive path of the 18th century Neoclassical labyrinth at his feet, stands a boy, a sort of watchman that seems to be part of the decoration in the famous romantic garden. The guard at Parc del Laberint d'Horta had warned him that standing on the balustrade was not allowed but the view of the intricate design of the maze from above and the laughter of people getting lost in the wrong alley were so compelling that it is worth taking the risk of a second reprimand. In a way, I can understand the boy but this is surely a place to protect, a unique park in Barcelona with some history behind. A long, long time ago, works on the old estate of Joan Antoni Desvalls i d'Ardena Marquis of Llupià, Poal and Alfarràs, Catalan scientific and prosperous landowner, had been commissioned to Italian architect Domenico Bagutti. It was 1791. The marquis, who was a cultivated person and an artist himself, conceived the design of this romantic garden influenced by Greek mythology in close cooperation with the architect. Desvalls was vice president of the Barcelona Royal Academy of Arts and Natural Sciences for a long period of time and even wrote specialized scientific articles in the quiet of his well provided library. But turning back to the picture, the kid is looking at one of the three levels or terraces of the park, the first and lower level includes the labyrinth, behind his back the middle level features the temples with cupolas and Tuscan columns, and the upper level was meant to collect water for the garden (there's a superb pond with goldfish up there). Besides those levels which are covered with statues, busts, flower jars and fountains there are separate gardens with their own particular ambience. There's the Boxwood garden with topiary art, the Romantic with a faked cemetery, the Petit Laberint, the Domestic which is full of camellias and another devoted to moss plants called Jardi de les Molses. To complete the atmosphere of the place nothing like a small cascade away from the main path and a romantic channel leading to the Island of Love. Parc del Laberint d'Horta was opened to the public by the Town Hall in 1971 and later restored in 1994. If you want to visit the place, please check for more info here.
Posted by Carlos Lorenzo