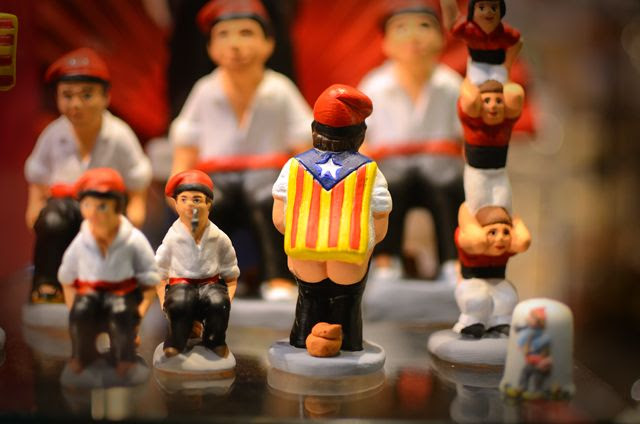 Caganers and politicians have one thing in common, they both do the same s***. Caganers do it on the floor and it looks funny, politicians do it everywhere they go to give a speech and pass an antidemocratic law and that is certainly not funny. A caganer can impersonate almost everybody, it depends on the imagination of the artist that designs them. Caganers are used frequently to mock popular personalities although originally these figurines are meant for Nativity scenes. Caganers are from Catalonia and other regions nearby and it is common that they wear Catalan traditional clothes, that is, a white shirt, a barretina (red cap), dark pants and a faixa (a sort of sash or band around the waist). We have seen some interesting examples of caganers in Barcelona Photoblog in the past, as is the case of George Bush next to Fidel Castro and Artur Mas or Rafa Nadal, the famous tennis player. In today's image we see a traditional caganer turning his back on us, surrounded by a bunch of similar fellows and apparently just doing what they do best, dropping their stools, although this time there is a certain difference, he is wearing the Estelada or starred flag that is waved by Catalan independentists that is slightly different from the Senyera, accepted as the official Catalan flag. As you can see, although Caganers still represent the common people and mock almost anything, even politicians, they can be used to send a subtle message to whom it may concern.
Posted by Carlos Lorenzo