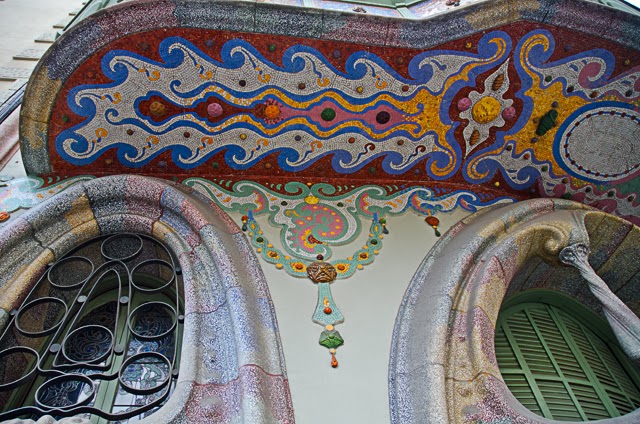 Casa Comalat is one of those secret places of Barcelona everyone would like to discover but sadly it is closed to the public. This Modernista house has two completely different sides which have been featured in Barcelona Photoblog in the past. There is the front side, magnificent, full of adornments, but sober in comparison with the backside façade, at carrer Corsega 316, which I find much more interesting and attractive.

But before we start, you should know some facts: The building is named after the its proprietor, Sr. Comalat, a moneylender that commissioned it to architect Salvador Valeri i Pupurull (1873-1954). Salvador Valeri built a house that is slightly different to other Modernista houses of the times, very rich in ornaments, very decorative, it became a perfect sample of Late Modernisme. Maybe you need a video to fully comprehend what Late Modernisme looked like and to discover what only a local Barcelona TV has unveiled, the inner secrets of Casa Comalat. The video is not in English but you really ought to watch it.

With regards to the Barcelona photo of the day, Casa Comalat Backside, you can appreciate the elaborate  ceramics on balconies and windows by artist Lluís Bru i Salelles and the over-undulating shapes framing wood blinds for the first time in Modernisme. Rigalt i Granell, a renown company at that time, was in charge of the stained glass works. Certainly, never backsides were so much better than front doors.