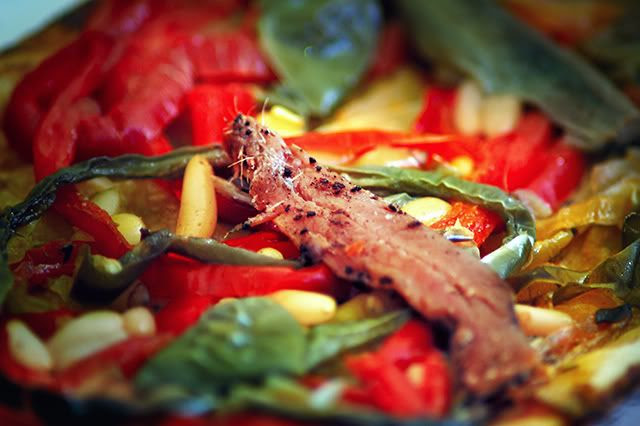 For a better understanding of what a Catalan coca is it is inevitable to mention pizzas. They are similar in appearance but each of them are good their own way. There is nothing like a home made, wood-fired oven baked Italian pizza, but, believe me, Catalan cocas elaborated in small towns by our grammas are delicious. The principle is the same, a flour-made base, crispy or soft, thick or slim, that accepts an incredible amount of toppings (open coca). They tend to carry less fat cause cheese is not present in all of them although some ingredients are not considered to be healthy food. What I mean is that it may be slightly healthier than pizza in some cases but being careful with the topping and the butter or lard in the dough. Wholemeal flour could be a solution. Let's face it, forget about your diet if you try them. As it happens with pizzas, some combinations of ingredients are more familiar and are accepted by many. Cocas can be open, closed, with a hole or just plain. They can be salty or sweet like the ones we have by Sant Joan celebrations. I've heard of sweet pizzas but I don't think they are as extended, except for the nutella pizza. Besides St. John's cocas the most common is what is known as coca de recapte which consists of botifarra (sausage), herring, olives and escalivada (roasted aubergines, onions, red peppers and tomatoes on hot coals). There are variations of these ingredients since the word recapte (Cat. recaptar or Sp. recaudar) refers to an old tradition that consisted in going house to house collecting whatever suitable edible ingredient you could think of to add to the cocas to be baked in the only wood-fired oven in town. So it is not strange that now herring is substituted by tuna or sardines. I suppose there was a point in which the recipe went wild and new cocas started to appear by the dozen. This one in the picture is what is known as, guess...Coca de Anchoas. There are many other types that I may cover some other day with a different picture. Take note of it then, when in Catalonia, do as Catalans do, have some coca de recapte.
barcelona barcelona+photoblog barcelona+photos barcelona+pictures barcelona+photography barcelona+images
Posted by Carlos Lorenzo