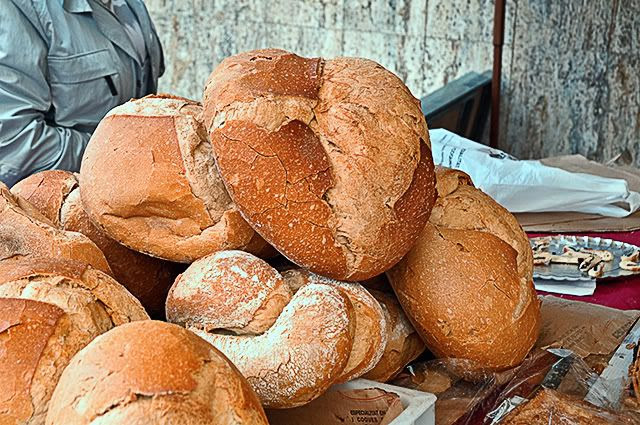 When you visit Barcelona or other cities and towns in Catalonia you will surely taste this bread known as pa de payés or pan de pueblo (peasant or people's bread). Don't be scared you don't have to hold it and take a bite, just eat it in slices. At the baker's they'll cut it up for you. Maybe you have seen similar bread before since many Mediterranean products are already familiar to you in your country. What I am sure some of you are not aware of is what we do with the slices of payés bread . But let's talk about this traditional Catalan product first. Pa de payés is a thick crusted bread with abundant crumb, higher carbohydrate content and less fat than a normal loaf. The thick crust is obtained thanks to a long kneading and fermentation time and a slow baking process. Due to its characteristics it is classified as a rustic kind of bread and as you already must have guessed by the name, people working in the fields were and still are the main consumers. As to the possible ways to serve the slices, there are lots of them. You can have them as such, although they are better in toasts, normally the ones popped into a barbecue grill taste better. Once you've got the toasts, you preferably spread tomato on top. How?, you cut the tomato into halves and rub it against the toast. Normally, you are given some garlic, olive oil and tomatoes together with the toasts so you wonder what about the garlic? Garlic is just an option although it is used on many occasions. If you have a knack for garlic then it is important that you cut one clove in two and rub it against the bread toast before spreading tomato, otherwise it is almost impossible to rub. Voila, you are almost there. Now you take the olive oil recipient, pour some on top of the slice of bread and finally add some salt. This part, which is the basis to prepare dozens of different kinds of pa de payés toasts, is called pantumaca or pa amb tomàquet (bread with tomato pulp). The toast or the slice can then be dressed up with cured ham, anchovies, omelet, sausages, red peppers and aubergines in strips, all sorts of cheese...The ideal situation is to have extra virgin olive oil and not the one you get in the supermarket and to use real juicy and ripe tomatoes recently cropped.