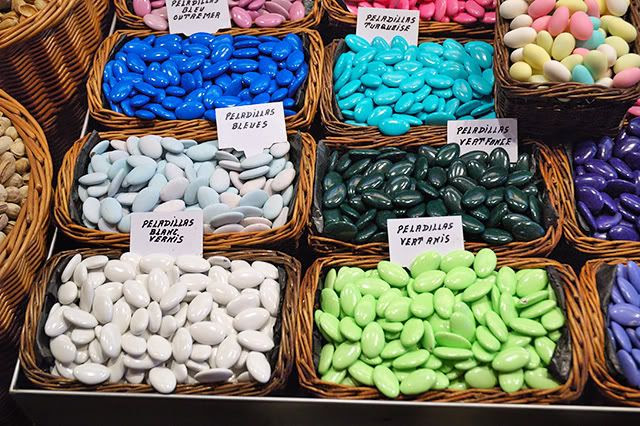 Dragées come in many different colors as you can see here. In fact I had never seen purple or green ones before. In English I prefer to call them dragées instead of sugar almonds or Jordan almonds since they can carry not only almonds but also raisins, nuts, liqueur or just chocolate but to be honest here they call them all peladillas (sugar almonds) in spite of having also the word gragea which is more general and seldom used. I don't know in your country but in Spain it is customary to give them as a present to guests at a wedding or baptism as they are thought to bring luck. They are usually presented inside a basket or a tulle net along with the newlyweds or the child's name. Peladillas are undoubtedly a coveted and appealing treat for children and adults alike. The origin is not clear, some say it was a Roman delicacy called tragemata created accidentally by Julius Dragatus, some others say it was the name of a slave or that it was reinvented by Pecquet in 1760 a famous French confectioner who gave them the current sleek appearance and used to supply the court aristocrats who carry them in small boxes called drageoirs. The final product is obtained after a five-day process which I won't describe here. According to the dictionary the word comes from Greek tragêmata that means sweet, treat, a sort of food made of nuts and fruit that could be munched or chewed. Gragea means pill or tablet so as you can see history is like a giant puzzle where every piece makes sense. There are even variations of the word like the verb to dredge in English which means to sprinkle or coat with some powdered substance and of course is used in cookery. Interesting don't you think? Peladillas are common in some parts of Valencia and Alicante, in Southeast Spain. The image was taken in La Boqueria market, Barcelona.