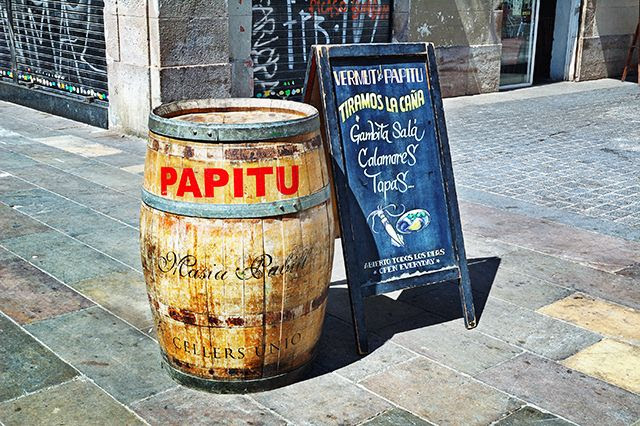 From the strategically located terrace of Bar Papitu on Passatge de la Virreina 1 on a lateral corridor at La Boqueria you can witness the constant flow of visitors to the famous market near La Rambla. According to many they serve good tapas so why not take a rest there after the always difficult walk through the crammed packed market premises. This barrel in the picture really caught my attention, specially the red letters advertising the place. Papitu was the name of a renown humor publication in Catalonia from 1908 to 1937. It had a clear leftist orientation opposite to their conservative rival magazine called Patufet closely connected to the church. Papitu played an important role in the history of satirical publications in Barcelona, specially during an initial moderate period conditioned by the censorship of Primo de Rivera. Right after the dictator's resignation in 1930, Papitu became more irreverent, particularly with regards to the clergy and spicy, naughty, if you know what I mean, in the sense that they use double meaning jokes and symbolic sensual illustrations. But let's not forget my post was basically about the bar. Here is Bar Papitu on Myspace and on a Google map.
barcelona barcelona+photoblog barcelona+photos barcelona+pictures barcelona+photography barcelona+images
Posted by Carlos Lorenzo