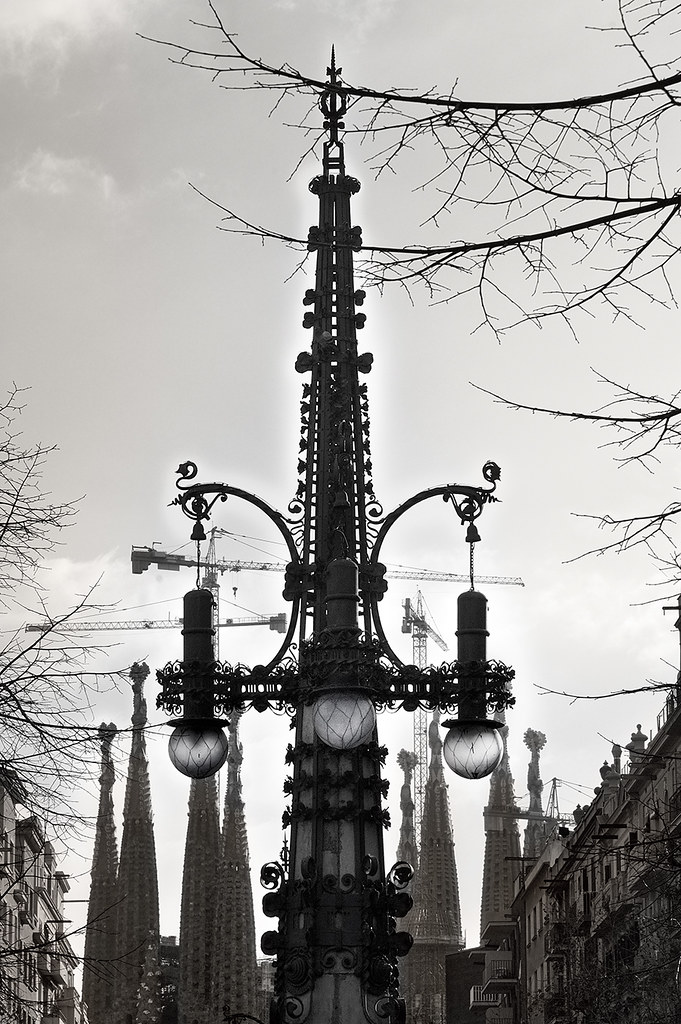 There was a time when this modernist lamp post along with other three, were part of an imaginary geometric figure on a square at the intersection of Avinguda Diagonal and Passeig de Gracia known as Cinc D'Oros (Five of Gold in a deck of Spanish cards). Although the decision to make the square dates back to 1907, meant to honor Pi i Maragall, president of the Republic, it wasn't till 1915 that the place was fully conditioned.

First there were only the stones and a round space in the middle. The lamp posts, later fixed on the stones, were made in 1909 by architect Pere Falqués, the same artist that created the famous 31 lamps integrated on benches along Passeig de Gracia. Maybe it was by that time that the curious name after the five of gold card appeared cause they looked so from above.

In 1934 the monument was officially inaugurated with a sculpture by Viladomat in the middle. Such sculpture devoted to the Republic was later replaced by an obelisk and a lady representing Victory (1940), in this case of General Franco, by sculptor Frederic Marès.

The four lamp posts and the statue once unmounted were stored in a municipal warehouse at carrer Wellington. The sculpture dedicated to the Republic was placed at Llucmajor square in Nou Barris quarter in 1990 and the lamps, well, now you know where they are. All four of them can be admired along Avinguda Gaudi which goes from Sant Pau Hospital (at my back in the picture) to Sagrada Familia cathedral in the background. I hope you like the black and white option.
Posted by Carlos Lorenzo