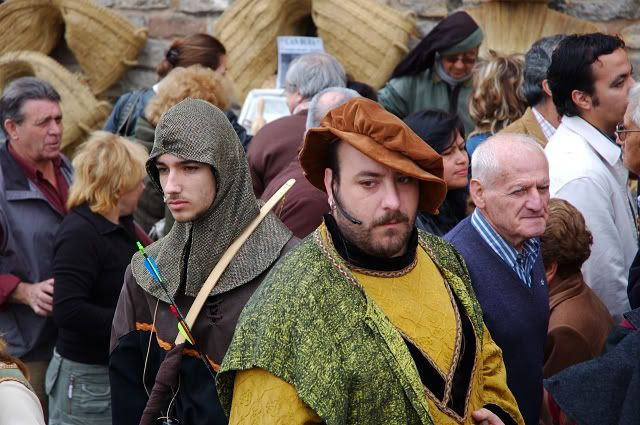 Súria Medieval Crafts Fair took place this weekend in Poble Vell, the old part of this fortress town. The origins of the fortified villa can be traced back to the XVIIth century when it started to grow around the castle already built in the Xth century. There was a need to protect the salt route along the Cardener river nearby (salt was exploited in the Cardona Valley since Roman times)and also because this land marked the limits between Christians and Saracens. Other important events in the history of Súria have been the cruel Carlist wars in the XIXth c. or the exploitation of potash deposits in the area discovered in 1912. So far so good...As an introduction after yesterday's vegetable stall I show you some folks in town dressing in medieval costumes. An archer and a lord perhaps? I specially like the staring into space of both of them. I was really lucky. From here, congratulations to the artists and citizens of Súria, an attractive Catalan town.