Fideua: Paella Made with Pasta 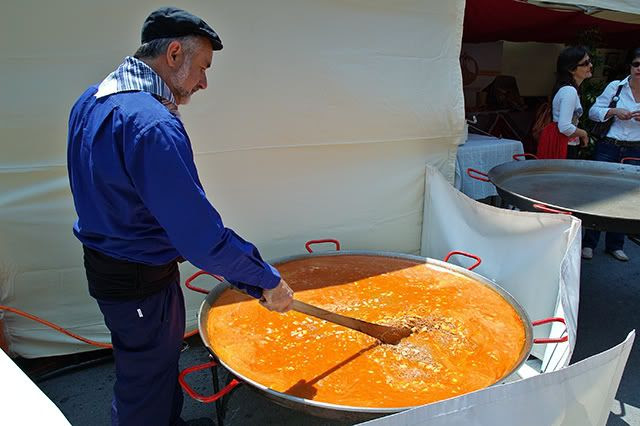 Following with the odd image carrousel on which Barcelona Photoblog is often riding, lets introduce Spanish Fideua, the pasta version of widely known rice paella. As the name suggest you need noodles (fideos Sp.), but not any kind of noodles. A good fideua is made with capelli d'angelo or vermicelli noodles. Like classic paella, seafood is an essential part of the recipe. When cooking any of both bear in mind that you can obtain a delicious dish either by packing the pan with all ingredients you can or by adding just the right spices and a most tasty kind of fish, its stew and fresh seashells. Whatever way you choose don't spoil it all by overcooking the pasta (or the rice in the case of paella). Here is one of the most simple and well explained fideua recipes I found and here is another much more elaborate. During popular celebrations in Spain it is not strange to see these pans or bigger ones (called paelleras or paellas) full of fideua or paella indistinctly to treat passerbyes (sometimes you have to pay for it). This man in Terrasa near Barcelona, was being followed anxiosly by a hungry pack of humans ominously approaching for the feast.