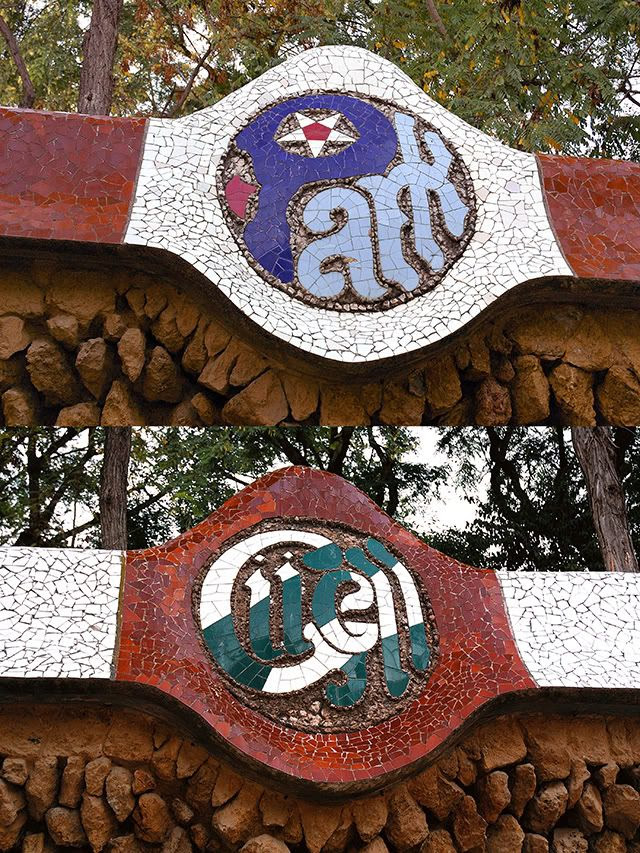 Although on looking at the thumbnail (some of you come through the City Daily Photo Blog portal or directly searching for Barcelona pictures in Google images) you might think these are a couple of hand wrist Swatch watches nothing could be further from the truth. These are the two mosaics found on the wall at the entrance of Park Guell, which were made following the trencadis technique used by Antoni Gaudi. For English speakers the name is completely normal but it is odd for us that it reads Park and not parc (Cat.) or parque (Sp.). Why "Park"? Basically because the place was initially conceived to be a sort of city on the lap of the mountain based upon the Garden City model by British inventor, Ebenezer Howard, who impressed by a futuristic novel published in 1888 and some other preceding works created his own Utopian plan about a garden city, a new home for an idyllic society that would make a better world. Remember that Gaudi and his art patron Eusebi Güell i Bacigalupi were very influenced by the modern ideas of those times, coming from Europe and the United States, and besides, they were very religious men. About the image, I should say they were taken on a dull weather day and are not especially my favorite, in fact, I think the idea of mixing both words in one is not new but they surely have helped me make my point about the origin of the name.