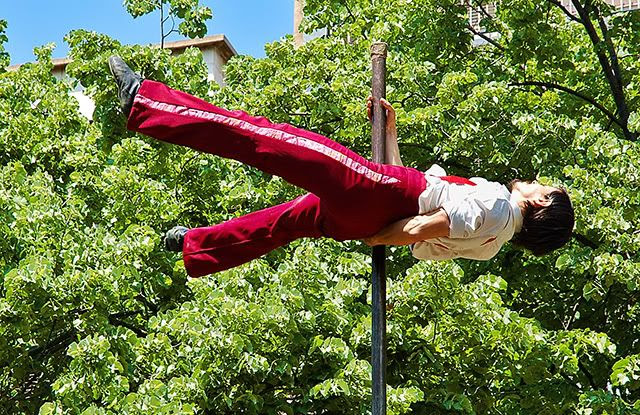 Talking about being lucky and random photography: We came across this show in Terrassa (in the outskirts of Barcelona) where a small group of artists was performing as part of the public activities organized by local authorities. The place was crowded and we were a little at a loss since this was only our second time in town. I took pictures of many artists but one of the acts really caught my eye: there were these two men, one holding a big pole on straps and the other climbing to the top with feline agility, they were doing the Perch Act. Notice the impossible pose of this guy, with his legs fully extended like some sort of human flag or vane pointing in the direction of the wind. I managed to take a picture of them backstage and to hear their names over the loudspeaker. Well, now thanks to the magic of the web and the little traces of memory I have left, I found out that these two men are well known in the circus world and the media. Here is their official site and some beautiful pictures. Ladies and gentlemen: Luciano Martin and Kike Aguilera from Zahir Circo. Let the show begin!