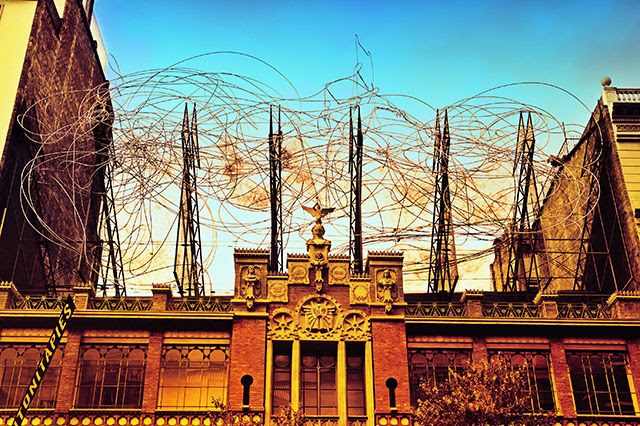 Weird places well deserve weird, psychedelic approaches. I have walked past this building a thousand times and a thousand times I haven't been able to take a decent picture. First because you have to stand on the opposite sidewalk of carrer Aragó which is a very wide street, second because it is wedged in between two awful buildings and last but not least because those wires on top, which were conceived by Antoni Tàpies himself do break all the harmony of lines with the beautiful Art Nouveau façade by architect Lluís Domènech i Montaner. So I thought, what the heck, I've got to give this a colorful touch. The result expresses not awe as in awesome, but rather as in aw...ful. I realize I am committing sacrilege here by trying to judge the artwork on the roof and the awkward appearance of an artistic sanctuary as it is Fundació Tàpies. In fact it is a magnificent building constructed between 1880 and 1885, one of the earliest samples of Art Nouveau in this part of the city, that breaks up with traditional 19th century eclecticism, introducing elements like iron and exposed brick, the latter evidencing clear Muslim influences. The place held the Montaner i Simon publishing house up to 1981, the most important in its field for decades (120 years of history) that became Antoni Tapies Foundation in 1990, acquiring category of historical monument in 1997. But what to say about Antoni Tàpies i Puig (he will be 87 next December 13, 2010), the incommensurable Catalan painter, sculptor and lithographer besides the fact I don't like the Cloud and Chair, 1990 sculpture on top of the building, well you better find out reading his biography at the official site: Antoni Tàpies Biography (Fundació Antoni Tàpies)
Posted by Carlos Lorenzo