Barcelona Photoblog: This is not Crisis, It is Capitalism!

This is not Crisis, It is Capitalism! 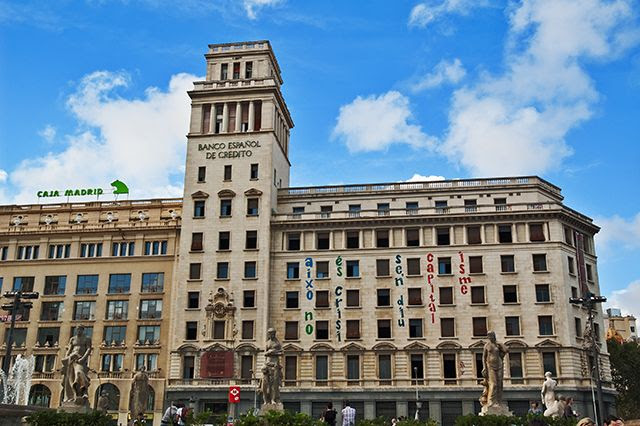 It is rather ironic that an emblematic building like Banesto's bank headquarters in Barcelona was recently occupied by anti new world order members defying police forces, wielding their particular urban guerrilla war. Progress, evolution, sometimes does not go hand in hand with peace, that's a fact in history. How many times have we seen students start a revolution from what seemed to be chaos and anarchy. I am not justifying anyone here. I see them destroy businesses, banks, burn garbage containers, make barricades, destroy cash dispensers, throw Molotov cocktails. The more I look, the less I understand the wrath. I just see people that reject the system because it sucks but I notice no real plan to make a better world. They just want to wipe off this one. But then again, who knows, maybe this is the new way of organizing a revolution, no parties, no unions, no leaders, no nothing, just plain rage against the machine. I must be getting too old to understand. Although it is true that when the people is overburden with oppression spontaneous revolutions tend to appear and I think that global exploitation generates anti global power movements. The scenario has shifted from a local level to the international arena and we are unable to appreciate what's happening if focusing the problem from local perspectives. Of course, inside a movement like this there are the violent ones and the rational members, what we would call the intellectuals. I prefer not to judge them although if I were sure they could make this a better world and this was the real revolution I would support them. One thing is certain, this is not just a crisis, this is Capitalism and because we live in a Capitalist system we have cyclic crises. No one said that socialism or communism were better though, cause they simply lack an economy that makes sense. If I knew what the answer is! Democracy is so corrupted!. By the way, the Pope was here today. It was for a good cause and it is great that that action made a lot of people happy and comforted their hearts. But I certainly distrust the church as an institution and it is very, very difficult to justify all that money treasured at the Vatican, when just a small portion would solve half of this planet's problems. I mean the intention was good in the beginning but now I simply can't see the result. True religious people are those who work anonymously directly with the poor in the wildest places with no luxury, no art, no palaces, no gold. You will have to excuse me today if I talk too much and I sound irreverent both with power and its antithesis but I wanted to get it off my chest.
Posted by Carlos Lorenzo