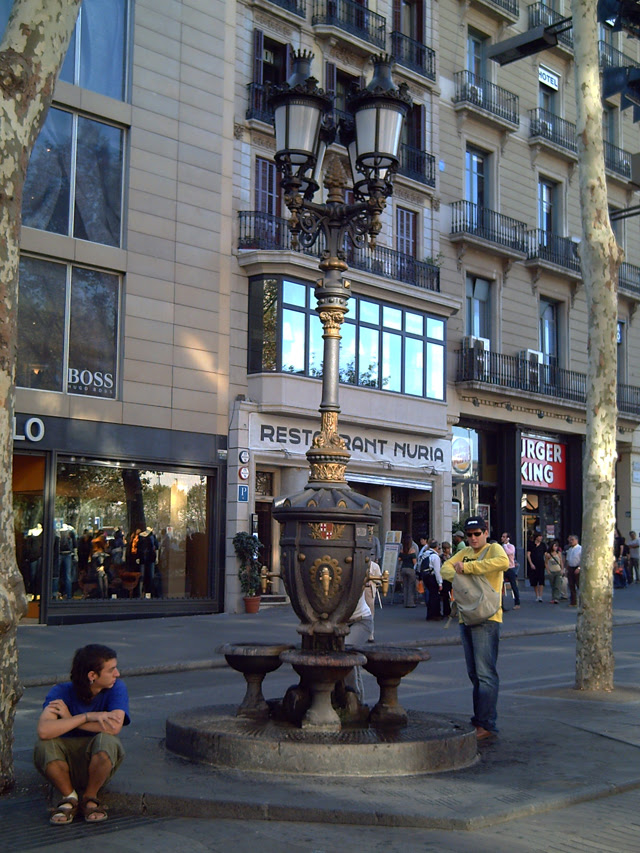 The upper part of Las Ramblas in Barcelona, is called La Rambla de Canaletes, precisely because it features La font de Canaletes (Canaletes Fountain). A brief history of Las Ramblas, now that I issued the topic, will introduce you to this icon of FC Barcelona fans and the city. As some of you already read in my previous posts, Las Ramblas were just a muddy path next to the city walls and a stream carrying rain waters towards the sea - the name Rambla in Arabic means strand or riverside. That was long before the walls were extended beyond the path, engulfing the Raval quarter, taking the city limits to nowadays' Avinguda del Parallel. The path turned into a wide road lined with trees by the end of the XVIII century. Part of the old city walls had been demolished and houses were being built along the way. In the second half of the XIX century, the second line of walls fell too, and the city grew as well as the flourishing Ramblas, which were divided into five imaginary parts: Rambla de Santa Mónica, named after a church, Rambla dels Caputxins, after a Capuchin friars' convent, Rambla de Sant Josep or Rambla de les Flors (due to the many flower stalls), Rambla del Estudis, named after a XVI demolished university, and Rambla de Canaletes, where our old XIX iron fountain is. Tradition says all those who drink from Canaletes return to the city. Of course try not to coincide with a day in which FC Barcelona soccer team fans celebrate a victory (quite often lately), as the place is stormed traditionally by a jubilant crowd being the fountain their highest totem and one of Barcelona's most appreciated landmarks.

Recommended: Footloose in Spain’s Capital of Style, Barcelona, an article by Matt Gross that recently appeared in the Travel section of New York Times. And second best, Gridskipper, the Urban Travel guide, also featuring Barcelona (with a group photo pool on Flickr).