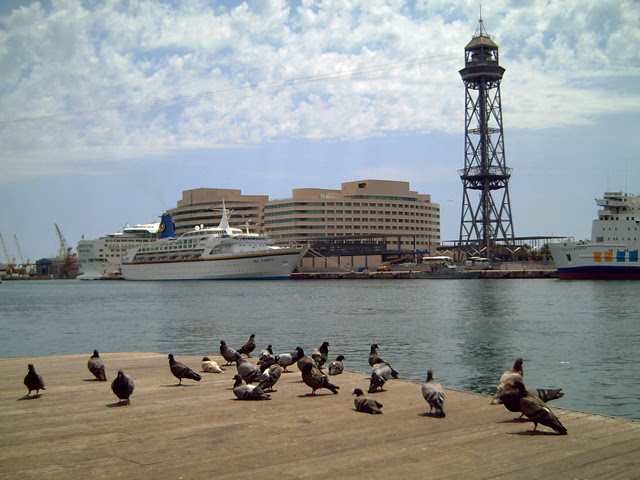 Here is a view of Barcelona Port, specifically Port Vell (Old Port) with World Trade Center building in the back, some cruisers and a lot of pigeons baking in the sun. I would like to mention my friend Kris from Little Town in Hungary who also included pigeons in her post yesterday. Once, long ago, in my childhood days I thought they were beautiful. I reckon they might be for those of you living in places where they are not crawling and creeping like rats as it happens here and in many countries.

The other day I was fighting over a McDonald's hamburger with one of those predators. No wonder they swarm freely in the harbor area, they don't have natural enemies, just hunger, viruses and maybe seagulls, another growing menace in modern cities. Hey, don't misinterpret me, I love animals...birds too, but not THAT many!.

Relevant information: Barcelona World Trade Center, located at the end of Moll de Barcelona (Barcelona Wharf) was created by US architects, Pei, Coob, Fred & Partners, authors of the glass pyramid at the Louvre Museum. For more details check the official site mentioned above. Cruisers like the ones in the picture depart from international seaport terminals on both sides of Barcelona wharf. The big metal structure is the tower of Jaume I, communicating the port with a neighboring hill called Montjuic by means of a cable car known as the Montjuïc Teleféric. Amazing view from there!