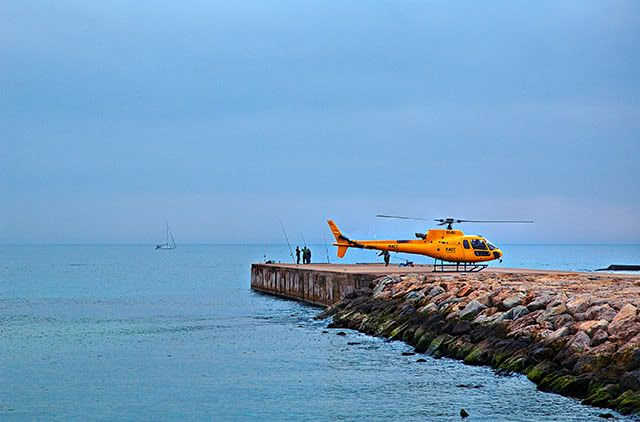 During past Pirena 2007 dog show on the beaches of Barcelona I spotted this RACC helicopter. It called my attention that some fishermen were there already and didn't seem to be scared, in fact I thought it was risky for them. Given that you don't see copters landing on piers that often I took the snap and voilà. RACC stands for Real Automóvil Club de Catalunya, an association with more than a million affiliates, in fact it is the first insurance company in the car business in Spain. It is also related with the travel sector and widely known for organizing sports events such as rallies. I would like to talk about photography now, about the rule of thirds. Although obvious for many, we tend to forget it sometimes. It consists of tracing two sets of intersecting lines so we get a square in the middle of our image (some cameras have a grid). The subject should be in one of the corners of such box for emphasis. Another thing to bear in mind is the horizon line which can be aligned more or less with the top or the bottom of the square whether you want to highlight the upper part or the bottom of the image. Maybe I should have lower the camera a little bit!