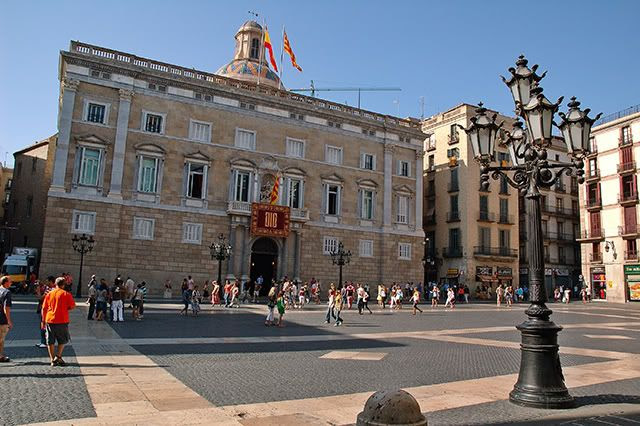 Sant Jaume square with Palau de la Generalitat in the background, a place many of you will remember if you've ever been to Barcelona. In case you haven't, you ought to know that Palau de la Generalitat is the headquarters of the Government of Catalonia and of the Presidency of the Generalitat. The building was originally designed by architect Marc Safont and erected under his supervision in XV c. over a previous property bought by the Council, further undergoing important structure transformation and blending of architectural periods. The façade and two important sections are of renaissance style but once the Courts took over the building in the XVIIIth century the chapel was extended and the bell tower was crowned according to the predominant Gothic style. In 1914 a major restoration was carried out to recover the palace to its original preservation state right before the occupation by the Courts. Those works were directed by Josep Puig i Cadafalch, the prolific modernist architect many times featured in this blog as for example in my post: La Diputació (Barcelona Provincial Government) not to be mistaken with La Generalitat!. Here's all you need to know about Catalonia's government structure. To finish I invite you to zoom in and locate today's image on the map at the bottom of the page.
barcelona barcelona+photoblog barcelona+photos barcelona+pictures barcelona+photography barcelona+images nikon+d70s
Posted by Carlos Lorenzo