Can Can Girls at Far West Saloon, Port Aventura, Spain 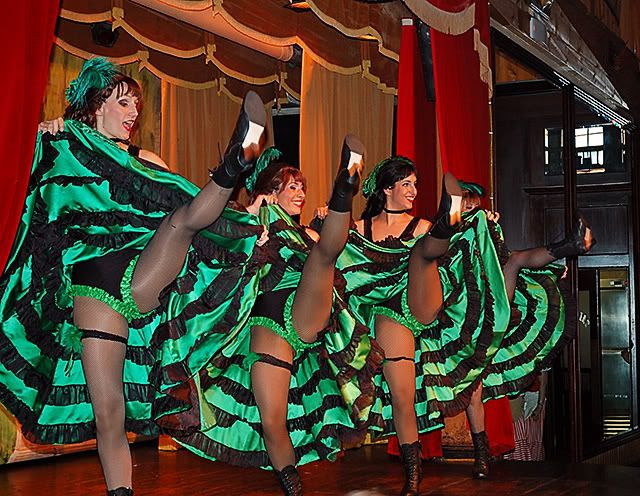 After a long journey through all attractions in Port Aventura amusement park, the best way to rest is choosing one of the many shows available. The Far West area is for me one of the most complete and genuine. This is a picture I took in the saloon where these beautiful girls were dancing can can ("The can-can (also spelled cancan or Can Can) is regarded today primarily as a physically demanding music hall dance, performed by a chorus line of female dancers who wear costumes with long skirts, petticoats, and black stockings, harking back to the fashions of the 1890s. The main features of the dance are the lifting up and manipulation of the skirts, with high kicking and suggestive, provocative body movements. The cancan first appeared in the working-class ballrooms of Montparnasse in Paris in around 1830. It was a more lively version of the galop, a dance in quick 2/4 time, which often featured as the final figure in the quadrille. The cancan was, therefore, originally a dance for couples, who indulged in high kicks and other gestures with arms and legs. It is thought that they were influenced by the antics of a popular entertainer of the 1820s, Charles Mazurier, who was well known for his acrobatic performances, which included the grand écart or jump splits—later a popular feature of the cancan. At this time, and throughout most of the 19th century in France, the dance was also known as the chahut. Both words are French, cancan meaning "tittle-tattle" or "scandal", hence a scandalous dance, while chahut meant "noise" or "uproar"." Wikipedia). Suggestions: Try to finish your drink before the show ends cause the house is emptied so the next group of people standing in line comes in.