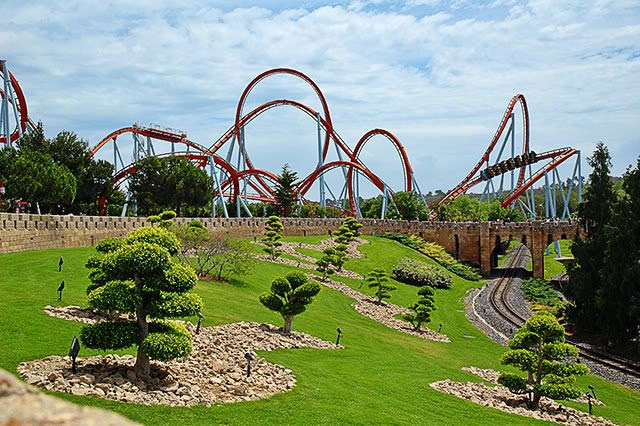 The eight-inversion-ride roller coaster called Dragon Khan designed by Bolliger & Mabillard (B&M) is Port Aventura Amusement Park's major attraction. Although the Furious Baco, a recent addition, is following closely, the impressive mountain of steel and its red silhouette visible from miles away still draws thousands of visitors. When you talk about amusement parks in Spain (I don't know in Europe) it is common stuff to boast about how many times you rode on Dragon Khan as if that was some sort exploit, you know. My personal record, is three times. Of course I am getting too old for this. My stomach was OK this weekend when I last tried the famous attraction, but my cervical bones ached all along. Not because of the initial 148 ft lift hill or the following 118 ft tall vertical loop but because of the roller coaster elements coming next: the diving loop, zero-G roll, cobra roll, etc. I posted this image so you had an idea although you may find it repeated hundred of times on the web since it is the classic spot you stop to point and shoot. About the other attraction, Furious Bako, I have to say, it is not fit for cardiacs. The speed is so huge that your head shakes and you look like having an epilepsy spell. In this case you don't need any height to fall and gain acceleration, you are literally fired at an almost unbearable speed: Top speed: 84 mph in just 3.5 seconds, G-Force: 4.7 G's.