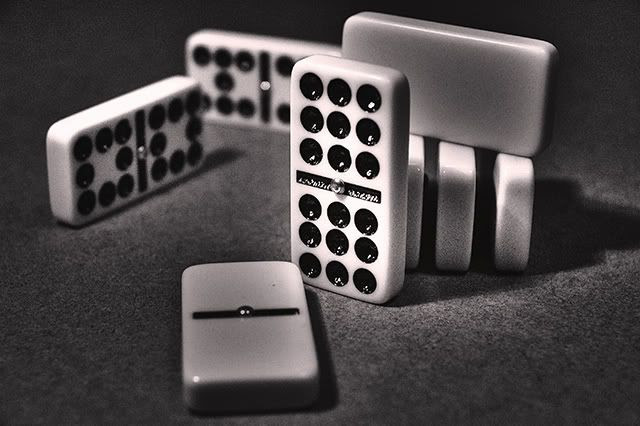 Domino pieces, dominoes or tiles can be part of different sets being the most common the double-6, the double-9, the double-12 or even the double-15 sets. They are all named after the number of pips on the face of the highest tile. Hey, don't worry I am not into the games biz, maybe I should! My point is, now that I chose black and white detail, that in Barcelona as in many parts of the country is quite common to see people, mainly old people, playing dominoes in the bar (not downtown of course). It has been a traditional game here and they always use a double-6 set so I thought they would find this picture interesting and weird. In Latin America, especifically in the Caribbean. dominoes is considered the national game (I remember players shouting and sitting on the porch drinking beers or rum till late at night during a visit to Cuba where I bought this set) and they use double-9. Who would say that of a game invented in China as far back as the 12th century!.