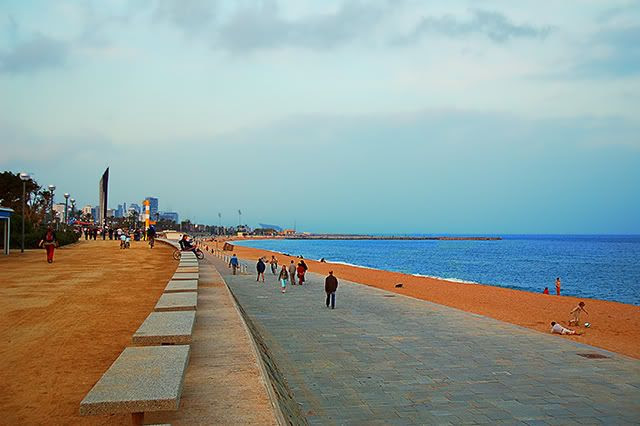 From this point on, there starts Sant Martí District in Barcelona which includes Poblenou Waterfront in the foreground and Diagonal Mar that you can partially see in the background. This part of Sant Martí is relatively new and appeared thanks to the 1992 Olympic Games and the Universal Forum in 2004. In Diagonal Mar there is a whole new skyline overlooking the Forum area (see the solar panel back there on the horizon?) and Poblenou Waterfront is made up of five blocks or illes with private gardens. Just behind such barrier you find some old warehouses and factories as well as new buildings that have been turned into design studios, modern offices or dot-com enterprises. But that is a topic for some other post. And I almost forgot, to the right, Barcelona beaches: Mar Vella and Nova Mar Vella.

Recommended: The Green Generator, a YouTube emulator player you can embed on your website to paste any video url or code so you can watch You Tube, Google Video or IFilm among others, generating and managing your own playlist and customizible skins. It was added on April 9 to Widgetbox and it is a hot blurb now at Technorati. Demo at Peebee's blog