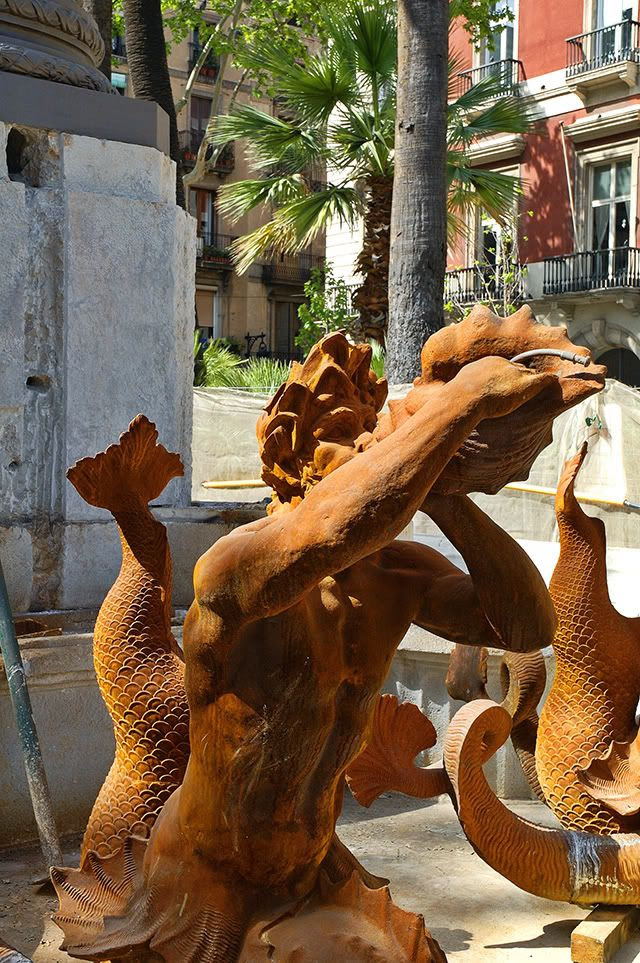 This is a satyr riding on top of a dolphin blowing a seashell. A clear allegory of a Triton, the merman son of Poseidon, half man half dolphin. There are four of them, being restored at Duke of Medinacelli Square next to Passeig de Colom and Moll de la Fusta (see Google Earth map picture). There are four satyrs in all, surrounding the first iron monument built in Barcelona (Damia Campeny, 1851), a big column holding the statue of Admiral Galcerà Marquet, Counselor of Barcelona in times of King Alphons the Magnanimous of Aragon. The place takes its name after Luis Francisco de la Cerda, Duke of Medinacelli who was the Spanish viceroy of Naples who yielded a part of the estate to the city town hall to build a square after the old Sant Francesc convent was demolished in this area of the city waterfront. The mythological creatures are being restored now but it will surely be a nice place to stay when water springs out of the seashells again. It is a recommended square to sit and relax under the shade of big palm trees on your way from Columbus monument to Maremagnum going along Passeig de Colom. By the way, did you know, that when this square was built the sea used to hit directly upon a high wall or malecon right across the road and all you see nowadays beyond Passeig de Colom is land gained from the sea? But that is part of another story.
Recommended: If you like social communities and web 2.0 stuff, follow this link via mashable: Social Tracker. Don't get too hooked up on this new toy!