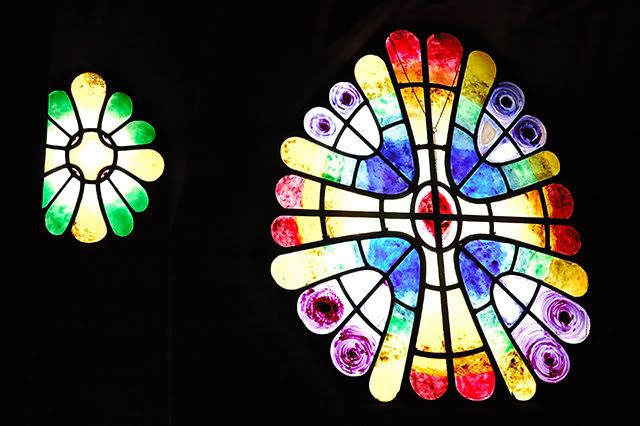 Colonia Guell, was a textile community which was established in 1890 along river Llobregat like many other such water-powered industries. There was an important recession from 1885 to 1890 in this sector. Eusebi Güell, an important Catalan businessman who commisioned Gaudi many of his works (remember Park Guell), had to move his factory from Sants to his lands near the city, the municipality of Santa Coloma de Cervelló at present. In 1880 there were important steam-powered factories near Barcelona, like Can Batlló in Les Corts or La España Industrial and Vapor Güell in Sants that were slowly declining. Antoni Gaudi had started to build a church for all the community inhabitants in Eusebi's estate but it finally ended up as a mere crypt (but what a crypt!) due to the financial problems of his mentor in the middle of this economic crisis. The entrance to the crypt in Colonia Güell is quite similar to the impossible inclined column pattern imitating the aerial roots of trees in Sagrada Familia, in fact this small sanctuary served as a small scaled model for the cathedral. I took this interior picture of the stained glass windows, featuring a cross but also suggesting a big flower as elements of nature were a leitmotif in all of Gaudi's work. The image is taken in a hurry as opening hours are limited due to Mass service. So I only had 10 minutes to madly rush along the oval temple and then run up the external staircase to the unfinished part of the building where the church was supposed to be (there is only a small belfry). I was the last one to come out of the ugly fenced perimeter which makes it impossible to take a decent full scene shot. More to come tomorrow.