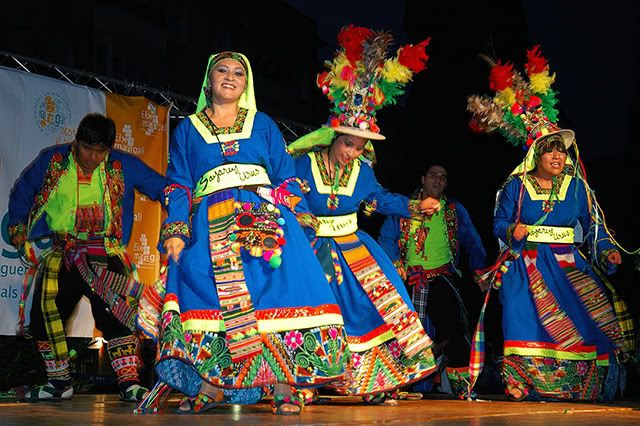 This is a group of Bolivian dancers with their colorful traditional costumes, in Nou Barris quarter, Barcelona. As part of an initiative by a local guild of shops and other small businesses, an integration party was organized in an attempt to show all time neighbors what newcomers' traditions are like thus strengthening the ties among the old and new Catalans. Immigration numbers have been skyrocketing in recent years in Barcelona and the process has been so fast that it takes some time for locals to assimilate different aspects such as behavior, language, cultural activities, food. This process, which is part of globalization and is inevitable, as it is inevitable that humans travel, interact, blend, trade and make a living where they see fit, is an old issue in the rest of Europe, in countries like France, Germany or the United Kingdom and now it is Spain's turn to face it. Young people, specially students have no difficulties with ethnic or social traits but our parents and grandparents are sometimes old fashioned and narrow minded.