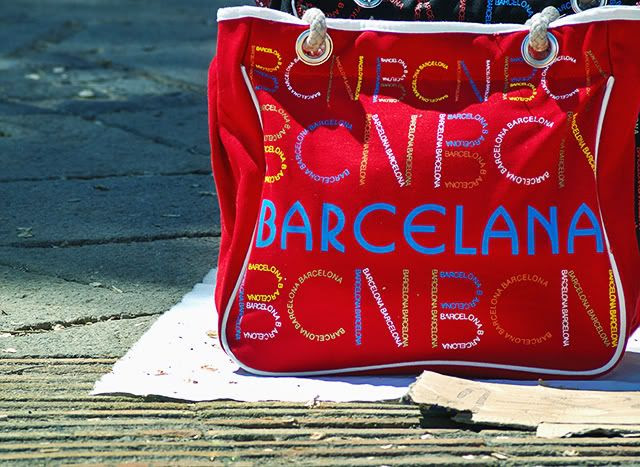 No, this is not a typo. It clearly says Barcelana. A play on words with Barcelona and Lana which means wool. Although the brand is known and its products are sold in local stores, this handbag you see in the image, was being offered on the black market or what is known as top manta somewhere near Mirador del Alcalde in Montjuic, Barcelona. The place which is full of tourists, has lots of possible exits to escape from the scene in case the police is spotted in the vicinity by strategically distributed watchmen. In this case there was an interesting cooperation among countries: most of the street vendors looked like Pakistanis or Indians but a small minority was Chinese. They carried their own watchman. After a while a warning came from one of the sentries indicating the police was near. Everything got smoothly and swiftly packed up in bundles with some kind of contrivance that folds in the whole blanket in seconds. False alarm. It had been just some guard patrolling on his motorcycle. All the illegal traders came back and little by little the fuss disappeared. Top manta is not new in Barcelona and although there are sporadic police raids to stop such activities everything spontaneously regenerates like a lizard's tail.
barcelona barcelona+photoblog barcelona+photos barcelona+pictures barcelona+photography barcelona+images
Posted by Carlos Lorenzo