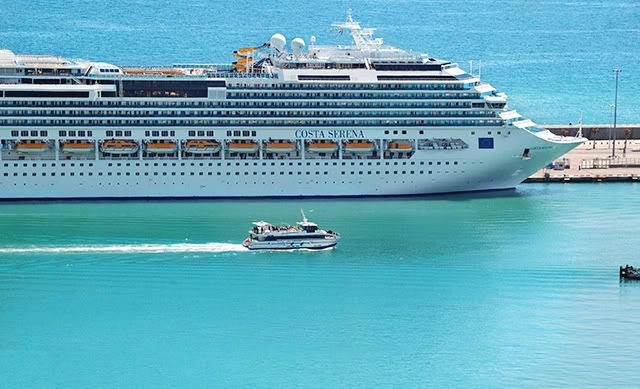 This a partial view of the entrance to Barcelona harbor where the Mediterranean cruiser terminals are located. The big vessel in the image is Costa Serena that belongs to one of the main operating companies, Costa Cruceros which generates about 126 visits to our port, according to 2007 figures. Costa Cruceros, brings about 330.000 visitors a year who spend around 50 euros per person in the city. This represents a total amount of around 15 million euros to Barcelona. All cruiser traffic in the port is managed by Creuers del Port de Barcelona, S.A. and the top responsible of all operations is the Port Authority of Barcelona (APB). If the previous figures look good you should know that the port expects to repeat the two million cruise passengers in 2009 and that last year Barcelona was the fifth port in the cruise world, behind the four major touristic ports in the Caribbean - Miami, Port Canaveral, Port Everglades, and the Mexican port of Cozumel. The city expects to receive a total of 880 cruise ship visits in 2009. APB calculates that cruise ships left 200 million euros in 2008! By the way, the small boat in the foreground is one of the Golondrinas sightseeing boats featured here in the past. These are the specs of Costa Serena cruiser: