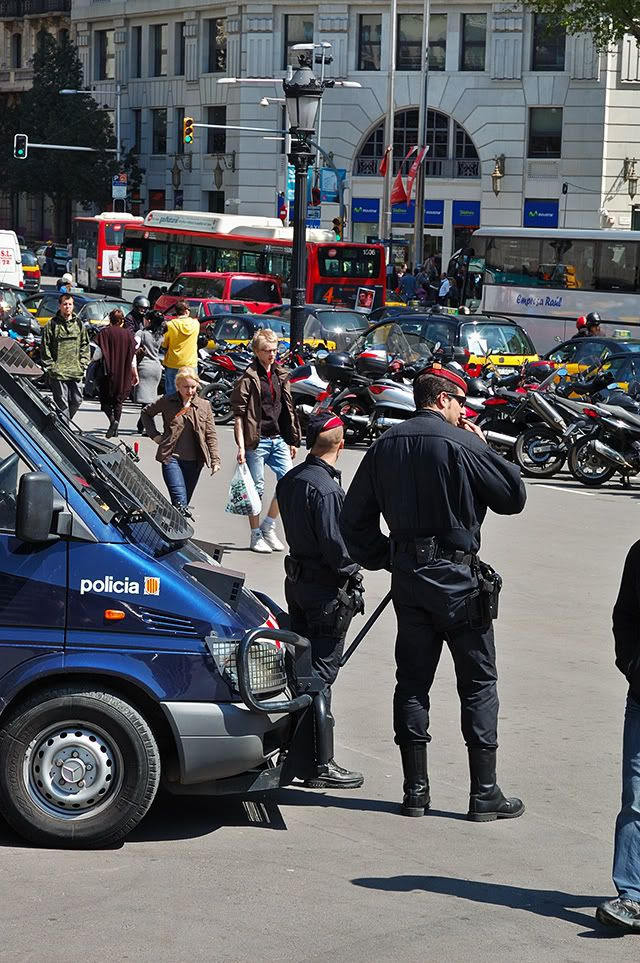 Plaça Catalunya used to be a relatively quiet place maybe 20 years ago but now is some sort of anthill being poked with a stick. Crowds move fiercely as if life was in danger. Some people, tired of so much fighting against the stream, get out of the turmoil and scurry to take refuge on the grass of the square, the benches or whatever appropriate surface where to lay their humanity. Chaos must have some order so it doesn't go out of control and that's when dissuasion and coercion enter the scene. In our case here, from the two mossos d'esquadra, guess who would do the dissuasion and who the coercion. This beautiful and important area of the city next to Las Ramblas and the Triangle with important shopping areas and a dense traffic of tourists is where the scum of our city likes to go hunting. If this was a desert it would be that small pond where animals have to go to quench their thirst, or maybe that wade in some African rivers, where crocodiles patiently wait for the gnus. In the same way, gnus get killed and are drawn into the water while the next fellow keeps on going, innocent tourists pretend not to see or get scared for just two seconds and then make their way out protected by the strength of the pack. Well, I am exaggerating here, but it is important that you are aware. I am not one of those that promote repression for the sake of security but let's accept the fact that some patrolling helps.

By the way, Barcelona is trying to cope with massive concentrations of people these days due to FC Barcelona's victories. The season has been so successful that Canaletes fountain, a very small area of Las Ramblas which has been traditionally the place to celebrate titles cannot hold the thousands of fans and Placa de Catalunya where these two policemen are, has been conditioned to receive the exultant multitude, mainly when we won the UEFA Champions League yesterday, the trophy that crowned the biggest campaign of our team in history.