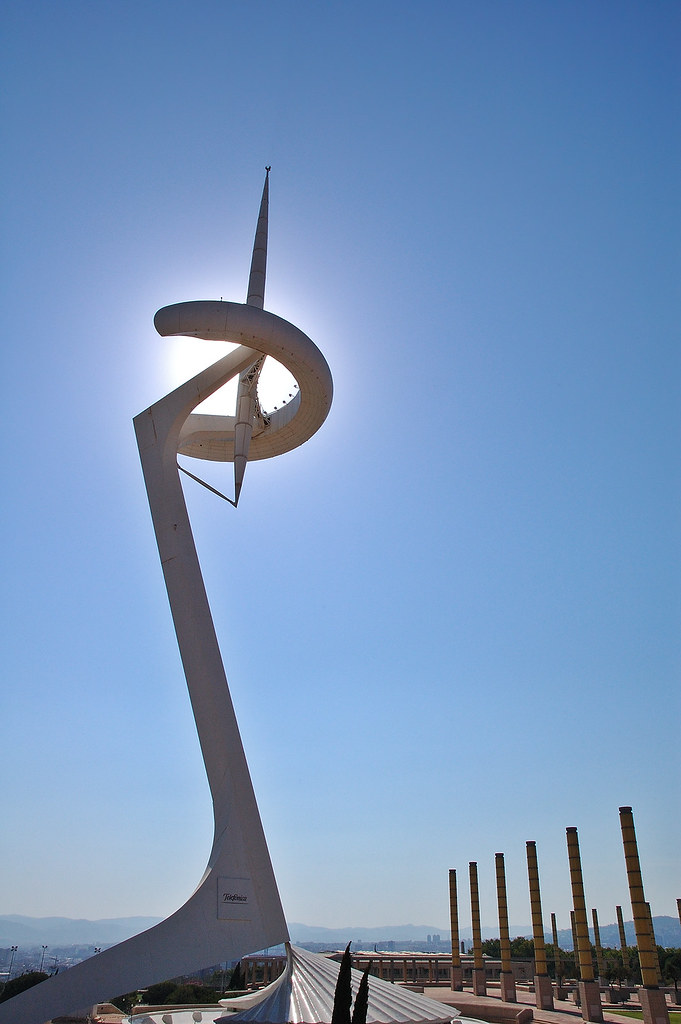 This is Santiago Calatrava's Communications Tower standing against the sun in the middle of the big square at the Olympic Ring on Montjuic Hill. The structure is located near Palau Sant Jordi sports center, Picornell swimming pools and the Olympic Stadium.

When you think of this artist, Calatrava, you think about impossible structures of steel and glass that resemble skeletons, carcasses with exposed ribs, sails, etc. In this case we are just talking about a 136 meter high tower that was meant only for telecommunications. But still it doesn't look like one of those horrible antennas full of dishes. It is weird I know but elegant at the same time.

The tower's white steel structure with the tip tapering like a flame, does recall the Olympic torch or perhaps the jet engine of some extraterrestrial airship and oddly enough it doesn't stand in the way, maybe because of the line of nearby columns illuminated at night or the immensity of the square that evokes Soviet or Maoist grandiloquent and megalomaniac architecture. I digress.

Some brief facts about Calatrava then: Born on July 28, 1951 in Valencia, Spain, he studied architecture in the Escuela Técnica Superior de Arquitectura (Valencia) and later on took post-graduate courses in civil engineering in Zurich. His work is well known all over the world so I will not deal with the many projects in his prolific career that you can consult in the following useful links: