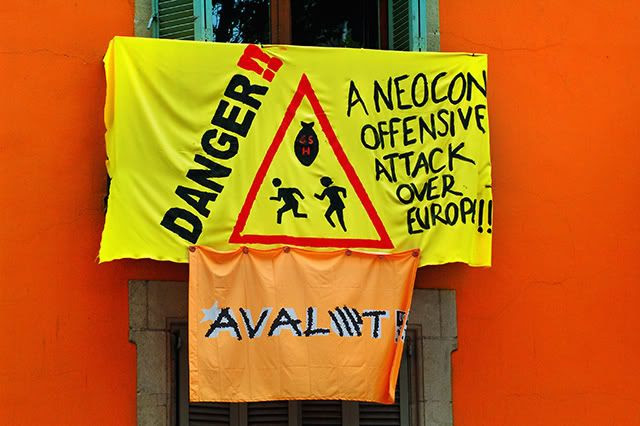 Apropos of this flashy protest sign warning us about the danger of neocon offensive attacks over Europe, I wondered what a neocon is after all. It sounds like Vietcom but it doesn't have anything to do with it obviously. I hate it when I use the wrong word to refer to something, so in order to avoid stupid mistakes like saying that ecologists are the new communists, as ex-president José María Aznar recently said, I sat and read some articles. Among them I found one titled So, what is a 'neocon'? which is quite illustrative. In spite of all the reading I jumped to the conclusion that this is a complex subject and that there are many possible lines of investigation considering each neocon and the scenario. You have to learn about weapons, state monopoly, powerful influences, factions, bankers, corruption, religious sects, pharmaceutical industries, vast media holdings and even evolutionist theories! But let's resume the article. Here are some key phrases that cleared some doubts: "...people who came to the realization that modern liberalism was not the kind of liberalism that they had subscribed to...", "...concerned about forging national crusades that can tap either the American public's patriotism or its desire for reform...", "...they are influential because they promote each other...", "...they say that America is a nation uniquely equipped as the sole remaining superpower to order the world and spread our values...". After I read this a new question started popping out in my mind: Is McCain a newcon? Given the evidence and according to analysts, he is. Following that line of thought I asked myself: Is José María Aznar a newcon? Yes, the man that proclaimed that global warming is not a scientific truth and that the process may not be affected by the human factor, is a newcon. If you want to meet the authentic newcon check Aznar, interviewed by the BBC. I think I understand the sign in the image a little bit now although it may have been drawn by "ecologists" of course.
barcelona barcelona+photoblog barcelona+photos barcelona+pictures barcelona+photography barcelona+images nikon+d70s
Posted by Carlos Lorenzo